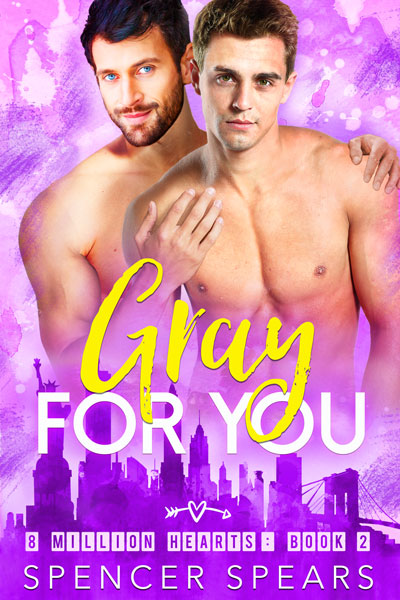 Gray: I’m not the kind of guy you take home to meet your mother. I’m an ex-adult film star with a GED and a giant co…llection of movie credits I can’t talk about in polite company. I might be good at helping other guys get their happy endings, but I’ve more or less given up on finding one of my own.

Until Tyler Lang walks into my life.

That’s right, my co-star for my final film is Tyler Lang–America’s heartthrob, until he disappeared from the radar last year. Tyler’s got a reputation for being a bad boy, a partier, and apparently straight, but the sweet, vulnerable-looking kid who shows up at auditions is completely different. And now that I’m getting to know him, I can’t help wondering what it is that’s made his eyes so sad–and wishing there were some way I could make it better.

I’m not supposed to get a happy ending. So why the hell won’t my heart listen?

“I’m yours. In whatever way, for however long you want me. Just say the words and you’ll have me forever.”

Tyler: I know what you’ve heard about me. Another spoiled child-actor, all grown up and out of control. I wish I could tell you you’re wrong, but the truth is, I’m a little bit of a mess. Okay, so maybe I’m a giantmess. And now, after getting arrested with an ez-bake oven’s worth of drugs I don’t even remember buying, I’m washed-up at the grand old age of 21.

After a year of rehab and community service, all I want is to work again. So when my agent sends me a new script, maybe I don’t read the fine print as carefully as I should. Which is how I end up auditioning for an adult film. A high-brow, literary adult film. But still. There’s no way I can go through with this. After all, I’m so deep in the closet I’m not sure I’ll ever find my way out. And I wouldn’t do this movie–except for one thing: Gray Evans.

Gray For You is Book 2 in the 8 Million Hearts series. While each book can be read on its own, they’re even more fun to read together. Gray For You is a 150,000 word m/m romance full of snark, sweetness, and a healthy serving of steam. Movie star romance and hurt/comfort themes. No cheating, no cliffhangers, and a guaranteed HEA.

Gray For You on Amazon

Gray For You has been released in audiobook format!