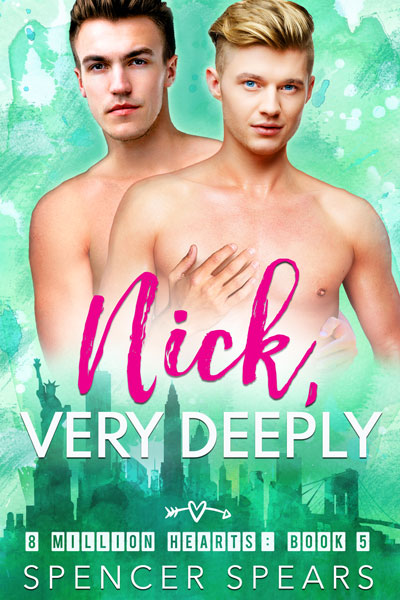 Eli: In my defense, I didn’t think I’d see Nick again. If I had, I would never have kissed him.

I got a fake ID because I was bored, not because I planned on meeting anyone. But from the moment I saw Nick–all tall, dark, and librarian-y, with hardcover books falling out of his messenger bag and eyes that made me forget how to breathe–I knew I needed to know him better.

So maybe I told a little white lie about my birthday. And maybe I went into the city again, and again, just so I could run into him. And maybe, on that last morning, I kissed him, because I knew it was goodbye.

Except, turns out, it wasn’t. Whoops.

Only now, I have to spend the rest of the year working with Nick, and it’s clear he wishes we’d never met. He says I have to move on, but the more I get to know him, the more impossible that seems. How do you move on from someone as strong and smart and sweet as Nick? How do you get over the first person who’s told you that you matter?

And what the hell do you do when, out of nowhere, he kisses you again?

Nick: I tried to keep my distance. I tried to forget that kiss. I tried to remind myself how dangerous it was, just being around Eli. How much I was putting in jeopardy.

I tried… but I never stood a chance.

Eli is everything I’m not. Reckless and wild, where all I’ve ever been is cautious. Open and loving, where I’ve only ever been scared. Willing to take risks, to be vulnerable, to be brave. I want to be brave enough to deserve him.

“I’d take it all back if I could.” That’s what I’m supposed to say. But the truth is, I wouldn’t. I would choose Eli every time.

Even if it means losing everything.

Nick, Very Deeply is Book 5 in the 8 Million Hearts series. While each book can be read on its own, they’re even more fun to read together. Nick, Very Deeply is a 135,000 word m/m romance full of snark, sweetness, and a healthy serving of steam. Teacher/student and hurt/comfort themes with a delicious slow burn. No cheating, no cliffhangers, and a guaranteed HEA.

Nick, Very Deeply has been released in audiobook format!