Thanks to everyone who participated in the Sweet & Spicy Gay Romance Deals Facebook party today! It was so much fun!

Here’s the M/M MadLibs story we wrote together. You guys, seriously, my stomach hurt from laughing so much at all your suggestions! Thanks so much for playing along 🙂 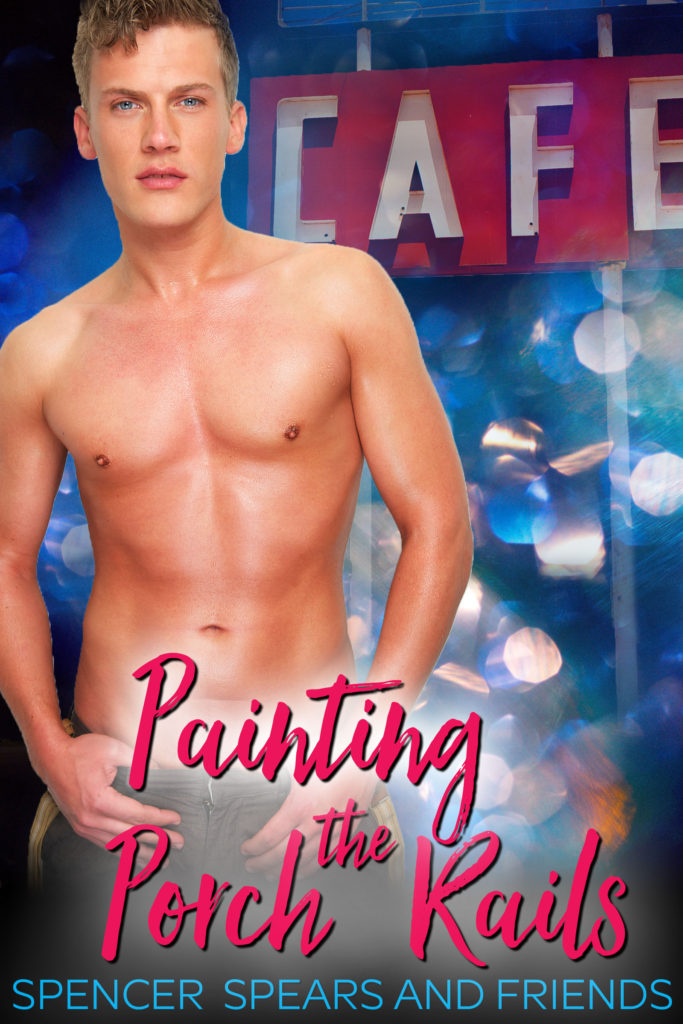 “Well slap my ass and call me Sally!” I growled, slamming my hand against the steering wheel of my delorean as the vehicle sputtered to a stop on the side of the road. Of course it had to pick now to stop working. It was midnight in the middle of rural Scotland and, naturally, my cell phone had no bars.

“Guess I’ll just have to walk back to that mom and pop burger joint I saw a few miles ago,” I muttered, pulling the keys out of the ignition. “Oh well, I have been driving for the recommended time to bake an XL Meat Lovers Supreme Papa Murphy’s Pizza. At least it’ll give me a chance to stretch my legs.”

Four miles and 5 hours and 72 seconds later, I’d done more than stretch my legs. I’d practically walked them off. But the burger joint was lit up, a beacon of hope surrounded by dark woods. I pulled the screen door open and stepped inside, letting my eyes adjust to the too-bright seeming lights.

I looked up to see a strapping, buff stranger walk through a door that said “Office” in the back of the building. He came up to meet me next to a large chaise lounge. He was babely, beefy, and hella fine and my throat suddenly went dry. Hallelujah, he was hot! Unbidden, I could feel myself getting hard.

“Uh, yeah,” I stammered. My voice was high and strangled sounding. I cleared my throat and tried again. “Uh, you don’t have a payphone I could use, do you? My delorean broke down a little bit up the road and I need to call a towing company.”

“No payphone,” the stranger said. He looked me up and down and I felt like he’d stripped me naked and catalogued every inch of my body with the intensity of his gaze.

“Oh, uh, okay then.” I sighed. Gee willikers! What was I supposed to do now?

“But you can use the office phone,” the man continued. He jerked his head back in the direction he’d come from. “If you want.”

“After you, Jake,” the man said, twisting the doorknob and ushering me into the room beyond. I heard the door close behind me and let out a sigh.
Thank God. Any more time in that man’s company was liable to make me do something stupid. It had been a hot minute since I’d gotten any action and I was so tired and frustrated about my delorean that I didn’t trust myself to keep it together around him. Besides, I didn’t need him taking a closer look at me and noticing the ginormous boner I was sporting.

So of course, that’s when I heard the sound of boots behind me. I turned to find the man standing inches away from me.

“Uh, hi.” A nervous laugh escaped me. Mother hubbard, what was he doing standing so close to me? “I didn’t realize you, uh, came in here with me.”

I was painfully aware of Gideon’s proximity. Every one of my senses went into overdrive, realizing how sweaty and swarthy he was. He smelled like cayenne and ginger and I couldn’t help but wonder if he’d taste like that too.

I glanced down and caught sight of his hands, all hirsute and scaly. I wanted to feel them on my skin, maybe even strangling my schlong. But glancing down was a bad idea, because Gideon’s gaze followed mine and I knew he’d seen my erection when he gave a low chuckle. My face flushed, staining my cheeks bright red.

“Do you, uh, need me? I mean, need something?” I stammered.
Dammit, why couldn’t I keep my composure around this guy? I’d been around hot dudes before and never had a problem. But something about him was shutting my brain down and letting my animal instincts take over, like a wild hippopotamus.

“I do,” Gideon said, his voice like chocolate syrup. “I forgot to mention. There’s a fee for using the phone.”

I blushed, my hands dropping to my ass to feel for the wallet I usually kept tucked in my back pocket. Schnikey, it wasn’t there! Had I left it back in the truck?

“Shit,” I breathed. “I don’t actually have any money on me.”

“Well dagnabbit! That’s not good. Unless,” Gideon smiled, “you can think of some other way you can pay to use the phone?”

Was Gideon saying what I thought he was saying? He couldn’t possibly be. This sort of thing didn’t happen in real life, did it?

But the longer I stood there, Gideon’s eyes glowing like a ferret’s, the surer I was that he wanted something from me. Something I was all too happy to give.

I took a step forward, closing the space between us, and reached up, putting my hands on his brobdingnagian chest. And then Gideon was leaning down, tilting his head, and his lips were on mine.

Jinkeys, that was nice! His lips were like fuzzy velvet, massaging mine hungrily. I parted my lips to make room for his tongue, letting him explore my mouth and claim it.

Gideon pulled me close, wrapping his petite arms around me. One hand slid down my back to cup my ass.

“Nice globes you’ve got there,” he growled.

“It’s working. French toast, what I wouldn’t give to put my turgid love hammer in your love glove! I bet you’re as tighter than a shoebox for doormice.”

I rubbed my stomach against his schween through his jeans. Gideon’s eyes closed in pleasure.

I trailed off as I lowered myself to my knees, kneeling in front of him like I was getting ready to worship his yogurt cannon. My hands made quick work of his belt and I pulled his jeans and his sperm-soaked boxer-briefs down. Gideon’s dill weed sprang free.

Tan and musky, he had the most beautiful flesh banana I’d ever seen.
“You’re goddamn beautiful,” I whispered.

“So are you, honeylover.” Gideon’s voice caressed my earholes. “Now show me what you can do.”

Was this really happening? Was I really kneeling on a cement floor in a deserted burger joint in the middle of nowhere, Scotland, ready to give this stanky stranger a prayerful power slide with my mouth?

Part of me couldn’t believe it, but his single-barreled pump-action sperm-shotgun was right there in front of my face, erect and majestic – and it couldn’t be denied.

I closed my hand around the base of Gideon’s trouser snake and lowered my lips to the tip. I moaned as I slid him in and out. God, he tasted good, like masala chai and nutmeg.

I got him as wet as I could, letting my lips and tongue savor every inch of his length. A trickle of silken seed was leaking from his tip and I lost myself in the motions, simply enjoying the utter sense of bliss that settled over me as I worked him up and down.

I pulled away and looked up at him. “Sounds good to me,” I whispered. “But I’d rather have you spill your maple syrup in my juicy bubble than my lips and stubble, if you know what I’m saying.”

In one fell swoop, Gideon lifted me up from the ground and set me on my feet, then backed me over to a credenza covered in papers and coffee cups in the corner. I worked hurriedly to unzip my pants and push them down, along with my boxers while Gideon pushed me down so I was leaning over the wooden massif.

“Holy smokes!” I breathed. “I want you so badly, but I’m a little out of practice and I might be a bit rusty. Do you have any spicy brown mustard to help ease the way?”

“No,” Gideon replied. “But I do have WD-40.” I turned and saw him reach for a teacup of the shimmering liquid balanced in a hammock hanging in the corner. As I watched, he poured it into his hands and rubbed them until they glistened with a light sheen. And then he brought them behind me.

I could hear the smooth, squelching sound of the WD-40 rolling across skin as Gideon stroked his meat tube. And then there was a dollop of it at my cavern – the most rumpled of my body.

He slid his elbow inside me then. I sighed in pleasure as he tap-danced it back and forth inside my rump, warming me up.

“You like that?” Gideon laughed as I squirmed back onto him.

“Cowabunga! You bet I do. The only thing I’d like more is your saucy meatlog.”

“That can be arranged.” Gideon slid his elbow out and I whined a little in disappointment. But almost immediately, I felt him place the tip of his spicy salami up against orifice of my breadbox.

“You ready, Huckleberry?” he asked.

I smiled naughtily over my shoulder at the hefty man behind me. “May the force be with you.”

And then Gideon pressed himself inside me. I let out a loud groan as he sank his dingaling to the hilt in one long stroke.

“No freaking way! Your Babadook is so tight.”

“Well your willy is so big. So I guess that makes us a perfect pair.”
I moaned as Gideon began to go to work. His strokes were slow and tentative at first but soon enough he was picking up the pace, defenestrating me wildly.

“Harder, harder,” I begged, and Gideon obliged, driving into me with force. It felt better than cleaning dustbunnies out from under the sofa, that’s for sure, and I surrendered to the sensations flying across my skin. I felt like tiny gerbils were screaming inside of me. God, it had been so long and, embarrassing as it was, I knew I couldn’t last.

“Yeah, you like this? You like it when I punish you with Mr. Johnson and the Juice Crew?”

“Tell me what you want. You want me to leak my lemon juice inside you?”
“Please, yes,” I begged. “Fill me up with your Kahlua and cream!”
“Ejaculate for me, cookie,” Gideon said as he reached around to stroke my giraffe.

The words flipped a switch inside me. My climax overtook me, building from my very core. It was as though Gideon’s hand were my shelter, my safety deposit box, my home, and I exploded with enough force to paint the porch rails.

I felt his dongle twitch, then tremble, and he yelled, grinding into me three more times as he creamed his coconut oil deep inside. Our bodies shuddered together, united in ecstasy.

I could barely remember where I was when he pulled his sperm-spewer out of my crevasse. I felt like I needed to sink back down to earth. That had been the most pole-polishing experience of my life.

“Well, the phone’s yours now if you want it,” Gideon said, zipping himself back up. “But if you’d rather, you could spend the night here and call for a tow-truck in the morning.”